Gordon LAM: Sino-US is heading for rocks, opportunity knocks but once for Hong Kong people 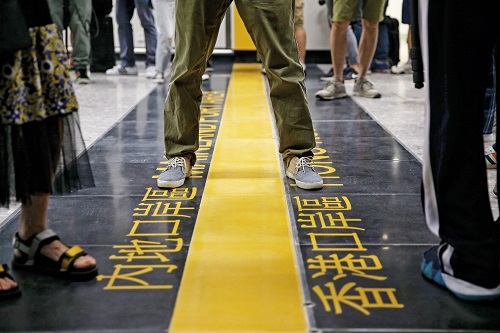 In midst of the year-long turmoil of social movement in Hong Kong, Beijing government recently has responded fiercely to those who intentionally destroy “national unity and territorial integrity”.

The National People’s Congress decided to enact national security legislation for Hong Kong to uphold the city’s social and political security from separatist, subversive and terrorist acts. The legislation also safeguards Hong Kong from any forms of foreign intervention. Some express concerns if the law will damage the city’s high degree of autonomy and economic status as a free-trade harbour.

Zhang Xiaoming, the deputy director of the Hong Kong and Macau Affairs Office, raises the core issue behind Hong Kong’s year-long violent protest in a recent seminar. He asserts that the riots behind Hong Kong were caused by the political factor, not a social or economic one. Justifying the “Second Return” of Hong Kong, he emphasizes the Central Government’s determination in tackling and repairing Hong Kong’s security is a reasonable, rational and resilient gesture to challenge the trigger from the West.

His assertion somehow proves to be candid. After 23 years of returning to China, recent figures and social uprisings reveal that Hong Kong citizens are less willingly to identify themselves as “Chinese”; only 10% of youth are proud to be citizens, in a survey conducted by the University of Hong Kong in June. This lack of national belonging and proven negativity towards the Central Government reflect the “undone” job of Hong Kong’s return to China – spiritually.

The shadow of colonialism still haunts the city ubiquitously. Post-colonial Hong Kong shares the British’ legal, political and social norms that continue to detach local Chinese from the root – the bigger motherland. Such disconnection from the big picture has pushed the city to the edge of harsh livelihood. People blame the property price, the salary, the system. But they never realized it is the incompetence of local development and obsolescence caused by post-colonial deprivation. Thus, prevalence of discontent among Hong Kong citizens surge drastically, from the surface of social or economic hardships. Yet, they are the devil’s fruits of the never-resolved “political virus”: Hong Kong independence, a surrealistic concept which has dragged the city in chaos.

Zhang further reassures the security law will substantially protect the people of Hong Kong to enjoy their rights and freedom in accordance to modern principles of rule of law. The Central Government promises that the scope that the law covers targets separatists and radical terrorists. The claims that residents’ rights will be jeopardized are misleading, and irrational. Rather, the law can effectively restore peace and faith in Hong Kong.

The enactment of national security law can decolonize the city’s lingering Western shadows, building Hong Kong’s true autonomy under the One Country, Two Systems policy under Central Government’s ruling. As the Joint Declaration governs the basic principles of Hong Kong’s return to mainland China, the doctrine also protects the city’s policies to be stipulated in a Basic Law by the National People’s Congress. How can the law violate the Declaration, as those British supporters claimed to be?

Besides, the Hong Kong government has failed to implement Article 23 through the Legislative Council ever since 1997. The government’s inability to pass the article might have caused what Hong Kong has tragically experienced throughout the year. Rioters burn, looters rob, protesters chant songs that glorify separatism. The security law can effectively fill in the gap for Hong Kong, repairing the loophole to stop foreign forces interfere with Hong Kong, a city part of China historically and presently. Here, Beijing is just doing the job as its responsibility as a “country ruler” deciding on internal affairs.

The law is limited to four major crimes: secession, subversion, terrorist activities and foreign intervention. These four categories are commonly within the scope of any country’s legal spectrum when it comes to safeguarding national integrity. Comparing with US, where national security law has been enacted since the 40s, the new proposal for Hong Kong seems to be a late comer rather than an intrusive bomb.

When the law passes the Congress, it will be an effective doctrine that walks along with the common law system that Hong Kong has always enjoyed. Allied with common-law features (e.g. burden of proof, presumption of innocence), there is no room left for foreign interveners or separatists to point at. With the law acting as the backbone to demolish separatist forces in Hong Kong, voices and violence of “Hong Kong independence” will no longer be tolerated.

The “Second Return” of Hong Kong is a forceful instrument to bring peace and restore the glory of Hong Kong. It is of utmost importance for the Government to win “the return of the hearts and minds of Hong Kongers”, as said by the late vice-premier Qian Qichen. The world shall witness the upcoming promulgation of the national security law solving the crux of Hong Kong’s turmoil, fairly and transparently.

The author is the student of School of Law, Tsinghua University.