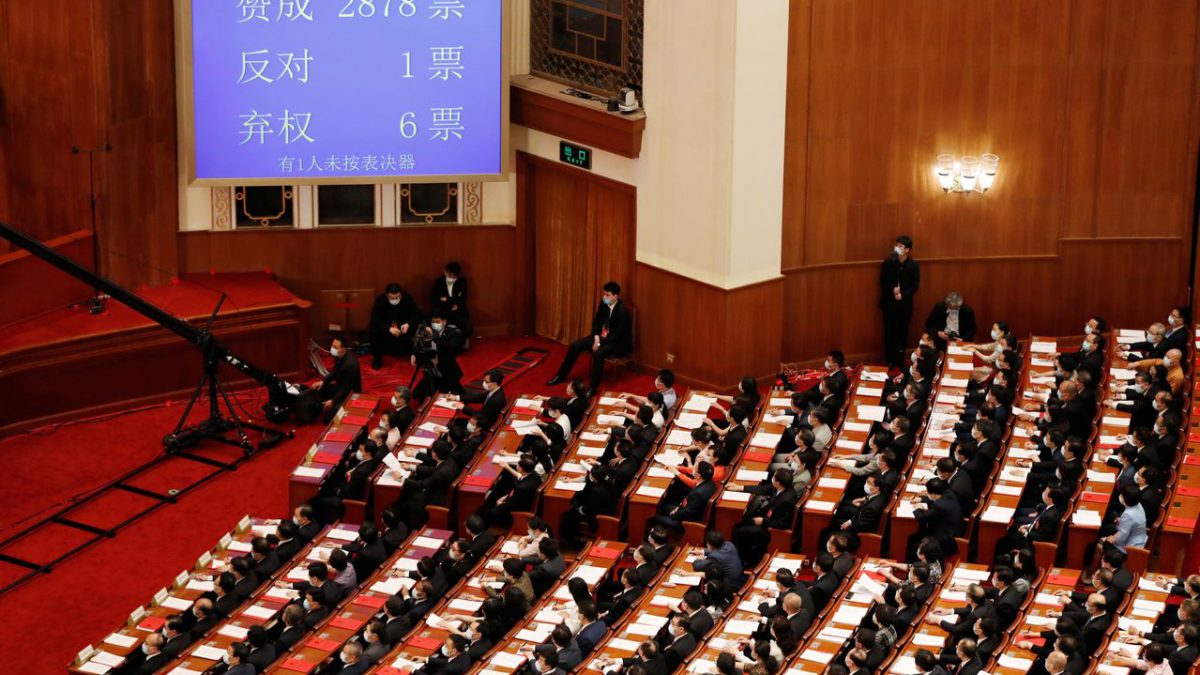 The National People’s Congress has decided to authorize its Standing Committee to enact the “Hong Kong National Security Law”. All walks of life in Hong Kong respond strongly: there  are enthusiastic supports   hoping to turn Hong Kong’s chaos to law and order; plenty of people also express their opposition and even anger, concerning that the Central Government has violated the promise of “One Country, Two Systems” which leads Hong Kong to “One Country, One System.” If we put aside all kinds of emotional reactions and calmly reflect on all the political disputes since the Handover, we will find that most of the disputes are related to the relationship between the Central Government and the HKSAR  stated in the Basic Law, especially Article 23 and Article 45. These two articles are often put together and compared by Hong Kong people, and it might be a misunderstanding.

The two articles have several common features. First of all, they are both in “future tense”, which indicate the direction of future development without a specific timetable, leading to great uncertainty. Take Article 23 of the Basic Law as an example, the article requires the HKSAR government “shall enact laws on its own” to prohibit seven kinds of acts that endanger national security. These acts are severe crimes that threaten national security, such as treason, secession, subversion against the Central People’s Government, etc. It is very rare for a country (whether a unitary system or federal system) to entrust national security legislation to local governments, and it is even unprecedented without legislative timetable! Indeed, this special arrangement is made by the Central Government to respect Hong Kong’s effective capitalist system, while understanding the features of Hong Kong’s common law and that Hong Kong people may concern about the legislation by the Central Government. However, the national security law is like a home security door. Even if the community has always enjoyed good public security, it is impossible for a household to have no security door or “not lock the door at night.” (the latest popular slang is “the uncovered chicken coop”). Otherwise, it will be too late when the thieves arrive.

Article 45 of the Basic Law states that the Chief Executive shall be appointed by the Central Government, and the method for selecting the Chief Executive shall be “specified in the light of the actual situation in the Hong Kong Special Administrative Region and in accordance with the principle of gradual and orderly progress. The ultimate aim is the selection of the Chief Executive by universal suffrage upon nomination by a broadly representative nominating committee in accordance with democratic procedures.” This “future-tense” plus “open-ended” article is also rare in the constitutions of many countries. Sections about state institutions and electoral systems in most constitutions only list out amendment procedures, thresholds, and amendment restrictions. However, Article 45, together with the Article 68 on universal suffrage of the Legislative Council, responded the demands of universal suffrage of many citizens during the drafting period, but it has also led to the endless debate about “double universal suffrage” since the promulgation of the Basic Law. Every dispute deepens social cleavages and hurts the relationship between the Central Government and Hong Kong.There is no universal suffrage article in the Basic Law of the Macau SAR. After the national security legislation was passed in 2009, there were basically no political disputes over the Basic Law. The stable social environment has provided favorable conditions for Macau’s economic take-off in the next 10 years.

The second common feature of Article 23 and Article 45 is that they directly refer to the relationship between the Central Government and the HKSAR which concerns the core interests of China. National security belongs to the central authority because it is the most important foundation and the prerequisite for the peaceful development of any country.The Central Government allowing Hong Kong (and Macau) to legislate on its own is based on trust in the SAR. Unfortunately, due to the general lack of national identity resulted from the long-term absence of national education, many Hong Kong people tend to put maintaining national security on the opposite side of protecting individual rights.Consequently, Article 23 was withdrawn even though some pan-democrats considered it as acceptable  in private.  Concerning the general election of the Chief Executive, Article 45 specify a unique method of ” universal suffrage + appointment” for the regional chief. However, since Hong Kong is directly under the Central Government, the nomination threshold is related to whether it is the patriots that govern Hong Kong and the Central Government’s substantive power to appoint the Chief Executive. The opposition parties’ obsession with the non-screening election of the Chief Executive has ultimately deprived citizens of the opportunity for “one man, one vote”.

Safeguarding National Security Must Be Unconditional, Not Tradable

The third common feature of the two articles is crucial and has been the focus of all cleavages and disputes, which is the relationship between individual rights and national interests. For many years, Hong Kong people have regarded the Basic Law’s protection of individual freedom and rights as the most important, but they have generally ignored or even resisted collective obligations as well as the safeguard of national interests. Some people even put themselves in a bargaining position with the Central Government. For many years, the opposition party and even some pro-establishment camp have had the “exchange theory” between Article 23 and Article 45, that is: if Hong Kong people obtain the right to elect the chief executive by universal suffrage, Article 23 of the Basic Law can be negotiated; some people assumed that if the HKSAR is willing to pass Article 23, the Central Government can relax the prerequisites for the universal suffrage of the Chief Executive, including the 8.31 decision. In recent years, even some of the pro-establishment think tanks have proposed simultaneous consultation on Article 23 and Article 45 to induce Hong Kong people to accept Article 23 legislation.

The Legal Profession’s Attitude Towards National Security Law Is Noteworthy

The way the National People’s Congress directly legislates for Hong Kong this time shows that endangering national security in Hong Kong is not in “future tense”, but in “present continuous tense.” It is necessary and in time for the Central Government to exercise its power in accordance with the law to safeguard national security and ensure the long-term stability of Hong Kong. At this point, Hong Kong people should realize that their views on the relationship between Article 23 and Article 45 of the Basic Law for many years is perhaps a l misunderstanding. It reflects the mindset of Hong Kong people which values individual rights over national interests and over-emphasizes the aspect of “two systems” rather than “one country”. For a long time,  a strange phenomenon of selective support for the Basic Law has prevailed among  many sectors of Hong Kong, including the legal profession: for example, emphasizing the universal suffrage of the Chief Executive while neglecting the national security legislation, or emphasizing the maintenance of the common law tradition while rejecting the power of the National People’s Congress to interpret the law. Many “selective supporters” are those who have taken oaths under Article 104 of the Basic Law, which is really confusing. The national security legislation marks the first time that Hong Kong, a common law area, performs statutory functions and allows its judges to adjudicate in accordance with the statutes of civil law. Will Hong Kong’s legal profession handle the National Security Law in an open and responsible manner, or will it continue to reject civil law and the legitimate power held by the Central Government?  It deserves further attention.

Hong Kong people must bear in mind that the essence of “one country, two systems” is that not only Hong Kong’s special system is  different from the country, but also beneficial to the country. The political disputes over the years can be boiled down to one point: how large the difference between Hong Kong’s system and that of the mainland can be, and whether the scale of the difference would be so huge that it might affect the national interests and the self-interests of Hong Kong. Only by cherishing the “two systems” and not abusing Hong Kong’s one system to harm the country’s interests can “one country, two systems” be truly sustainable and far-reaching.

The original text was published in the Opinion Edition of Ming Pao (May 29, 2020)

The author is the Founder and Chairman of the One Country, Two Systems Youth Forum and a member of the Basic Law Promotion Steering Committee