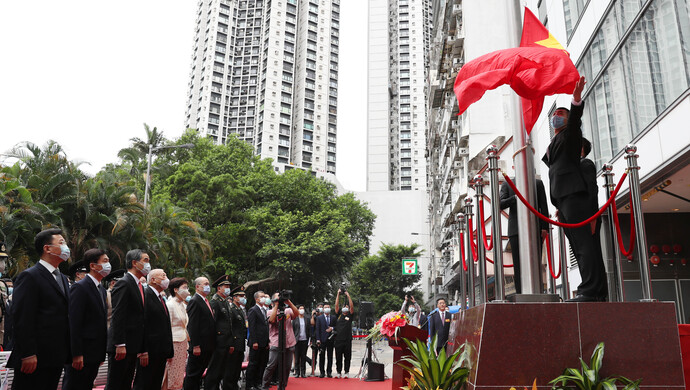 The Office for Safeguarding National Security in Hong Kong was inaugurated in the early morning on July 8, just one week after the enactment of the law for safeguarding national security in the HKSAR by the National People’s Congress Standing Committee (NPCSC). Its presence signifies that the practice of “one country, two systems” has entered into a new era.
The location of the office warrants special attention. Renovated from an existing hotel, the office is situated in Tin Hau, a few hundred meters from the busy district of Causeway Bay. This quiet area, commonly known as Wun Sha Street, has a number of fine bars and restaurants visited by local people and Westerners. The little oasis has no tourist hotspots, but offers a unique breathing space for middle class and residents nearby.Most Hong Kong people would notice that the office is adjacent to two places of colonial legacy. The Queen’s College, a famous government school founded in 1862, is at the opposite of the office with numerous famous alumni including Dr Stanley Ho. Victoria Park, the largest urban park in Hong Kong, by which the same “Queen” was referred, is just 100 meters away.The office’s functions and duties can be found in the new law. It includes, inter alia,  analyzing and assessing national security issues, overseeing, guiding and providing support to the HKSAR in safeguarding national security, and exercise jurisdiction and handle cases in very exceptional circumstances. It represents the fourth central government office in Hong Kong, after the Liaison Office, the Commissioner’s Office of the Foreign Ministry and the People Liberation Army HK Garrison.The office will also be consulted in key issues related to safeguarding national security in Hong Kong. It will give opinion to the appointment of key personnel related to law enforcement and prosecution, namely head of national security department of the Police Force and head of specialized prosecution division of the Department of Justice.The staff of the office shall abide by Hong Kong laws as well as national laws. Article 50 of the national security law specifies that it shall not infringe upon the lawful rights and interests of any individual or organization. Demonization of the law and the office has already been started prior to its enactment and establishment, by local opposition and foreign politicians. But any unbiased person would agree that the law conforms to modern legal principles, including presumption of innocence, no second trial of the same offence, and no retrospective effect.

The law aims at preventing, suppressing and imposing punishment on acts endangering national security. The office’s presence in an urban area will have a strong deterrent effect in prevention and suppression of these crimes. While the freedom of speech and assembly of Hong Kong residents are protected according to Basic Law, organizers and participants of gatherings and protests in Victoria Park had better study the legal provisions in detail, so that no acts endangering national security are committed.

While the office is situated next to two places of colonial legacy, the new law itself also incorporates both continental law and common law characteristics. The cases will still be adjudicated by existing Hong Kong common law judges, designated by the chief executive. The judges may not have experience in adjudicating a law of continental nature, but legal principles of both systems are similar, and safeguarding national security is the key duties of every government in the world, no matter East or West.

Victoria Park will still be the most popular place for Hong Kong people, for sports, gatherings and assembly. The presence of the national security office represents a new era for Hong Kong, that “one country” is the cornerstone of “one country, two systems”, the system of Hong Kong will be retained and be more prosperous with the enactment of the law. Hong Kong’s system will not only remain different, but also be beneficial to our nation. That makes the “one country, two systems” sustainable in the long run.

Without challenging the bottom line of “one country”, opposition voices in Hong Kong should be tolerated and their legal expression should be encouraged. The law requires those standing for elections and assuming public office shall uphold Basic Law and swear allegiance to the special administrative region. Those convicted to the national security offences should be removed from office and not allowed to stand for elections again. This is no harsh requirement and every politician who aims at serving Hong Kong should accept it with delight. This is also a test to the opposition parties and politicians in Hong Kong. Are they prepared to become “loyal opposition”, being abided by the Chinese Constitution and Basic Law? Hong Kong will have a genuinely stable and prosperous future if they do. That is also part of the “new era” that we are looking forward to.