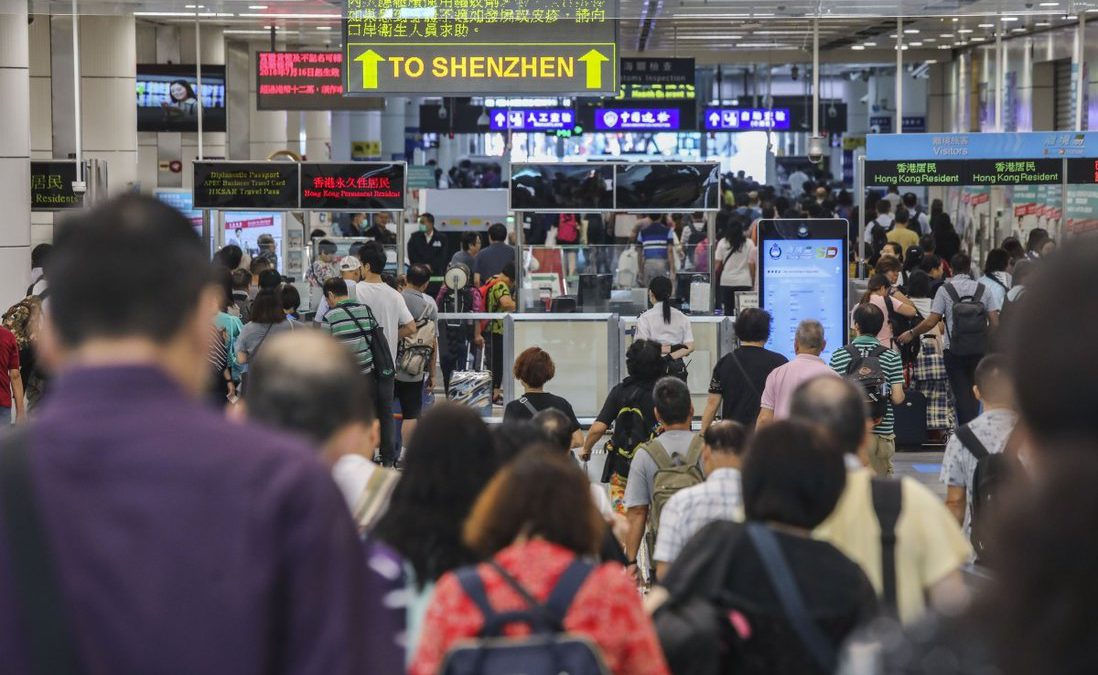 Secretary for Labour and Welfare Dr Law Chi-kwong published two articles in October 2020, addressing the problem of rapidly aging population in Hong Kong, as well as the services for the elderly aged 85 and above in both Hong Kong and mainland China. According to the population projection covering the period from 2020 to 2069, the proportion of those aged 85 and above would drastically rise in 10 years from now. In 2049, the number of this age group is projected to increase to over 0.8 million, nearly 4 times larger than now. Dr Law Chi-kwong also mentioned that many elders have moved to live in the Greater Bay Area, which raised the question of whether it is an ideal choice to retire in the GBA and what difficulties should be overcome. One Country Two Systems Youth Forum published the Study on the portability of welfare benefits across Guangdong-Hong Kong-Macau Greater Bay Area (《粵港澳大灣區社會保障跨境可携性研究》) in the second quarter of 2020. By evaluating current cross-border welfare policies and interviewing Hong Kong elderly people located in the GBA, the report suggested a number of policy recommendations.

The Features of Cross-Border Welfare and Retirement in Hong Kong

The cross-border welfare and services for the elderly of Hong Kong has various major features, as opposed to other countries and regions.

The government has launched the Guangdong Scheme and the Fujian Scheme in 2013 and 2018 respectively, allowing the recipient of OAA/ OALA to receive the same amount of allowance while residing in Guangdong or Fujian. However, the applicants are only eligible if they surrender their public rental units, which makes the scheme much less attractive.

2. Cross-border payment is unavailable. The allowance for the elderly living in mainland China is deposited into their Hong Kong bank accounts instead of mainland’s. In theory, they would have to return to Hong Kong or ask their relatives to withdraw the allowance for them, which are both inconvenient and risky for the recipients.

3. The emergence of “mobile retirement”. Many elderly people travel between Hong Kong and mainland China on a regular basis, which is more prominent following the operation of advanced cross-border public transport. The definition of “mobile retirement” in the report refers to those having residences in both Hong Kong and mainland China, and spending over a month living in mainland each year. Due to the realization of the “one-hour living circle” among GBA cities, many elderly people prefer to spend a certain time period in Hong Kong in a year, and spend the rest in mainland China, which generates the demand for cross-border medical treatment and services for the elderly. Reason for “mobile retirement” is the lack of trust to mainland China’s medical services. While enjoying larger space and low property price in mainland China, most Hong Kong elderly people who have moved to the GBA admitted that they preferred to visit a doctor in Hong Kong when having serious illnesses, including public hospitals, private hospitals and clinics. Moreover, as the medical vouchers could only be used in The University of Hong Kong – Shenzhen Hospital, the elders are more willing to travel to Hong Kong instead.

4. “Equal treatment” has partly replaced cross-border welfare. The Central Government has introduced various policies to provide Hong Kong residents with equal treatments as mainland residents in recent years, including social security, health insurance, school admission for children, etc., which have made up for cross-border welfare to some extent. Yet, Hong Kong residents who live in mainland China still long for high-quality medical treatments and services.

5. The incompatibility of retirement protection systems is the biggest obstacle to the merging of the welfare systems between Hong Kong and mainland China. Hong Kong’s retirement protection system is the Mandatory Provident Fund (MPF) which requires employers and employees to make monthly mandatory contributions, and the government plays no role in it besides legislation and regulation. The MPF is personal property essentially, and its traits are very different from that of mainland China. As a defined contribution scheme, the amount of MPF pension depends on the contribution amount and investment returns, the combination of which is determined by employees themselves. In contrast, the retirement protection system of mainland China is defined-benefit in nature, which requires the government to ensure the provision of a fixed, foreseeable pension, backed up by the Treasury of the Central Government.

Although the pattern of “mobile retirement” starts to popularize following the development of infrastructure, only very few Hong Kong elders are keen to live in nursing homes in mainland China. Nursing homes in Hong Kong have been short of supply for a long period of time, and the huge demand of places in Hong Kong could be eased if the government financially supports the elders to take up permanent residence in mainland China. However, the findings showed that services for the elderly are different from common consumption services, the government should consider the scheme in terms of elderly people and nursing institutions.

Affordability and quality are the two key factors of providing cross-border welfare. From the view of the elders, the essential factor is affordability. Without the financial support from both governments, it is difficult for a nursing home to achieve self-financing in the GBA. One of the nursing homes in Huizhou have accepted a lot of elders from the northeast region in China. They are willing to pay extra fees, usually over 10,000 RMB a month for a high-quality nursing home, to retire in a southern city with favourable weather, which is not cheap compared to local rentals.

From the view of nursing institutions in mainland China, they could be the beneficiary of cross-border welfare only by providing quality services. They should be recognized by the elderly from Hong Kong, as well as the government of HKSAR. Two nursing homes located in Shenzhen and Zhaoqing respectively are funded by the Hong Kong Jockey club, in which the elderly could receive financial support from the government. The government of HKSAR has been reluctant to use taxpayers’ money to subsidize cross-border services. But with the development of the GBA, the mindset should be changed in no time. By receiving training and assistance from Hong Kong’s NGO, nursing homes in mainland China would be able to upgrade their service quality to a level acceptable to the HK Government and thereby receive subsidies from the government.

Therefore, the future development of cross-border welfare should conform to the following principles. First, the “money-following-the-user” mode should be adopted without extra financial burden. The purpose is to allow the elderly to choose their favourite retirement location according to their own conditions. If eligible, the elderly should receive the same amount of welfare provision without the need of surrendering public rental units. Second, convenience for the elderly should be the overriding principle, which requires simplifying the application procedures. Third, both Hong Kong and mainland China should establish a mechanism of mutual recognition. The governments and experts from the two places should set up a set of criteria, providing qualifications for high-quality medical and nursing organizations. The elderly could use their vouchers and receive government-funded services in qualified organizations in GBA.

The number of days living in mainland China under the requirements of the Guangdong Scheme and the Fujian Scheme should be more flexible. Moreover, the approval procedure assigned to NGO should be simplified, and put more resources in assisting the Hong Kong elderly living in mainland China, including phone enquiry services, and contacts to local medical and nursing institutions, etc.

The government should consider transferring the allowance into recipients’ mainland bank accounts directly, which allows them to withdraw in the mainland. Not only could cross-border payment prevent any potential loss of allowance in remittance charges, but also reducing the time and extra fees caused by travelling to Hong Kong.

Medical vouchers of Hong Kong should be used in “AAA” hospitals in the GBA. Through qualification mechanism, both governments should ensure that at least one hospital in each GBA city could accept the voucher. This could provide more choices for the elderly and relieve the burden of Hong Kong’s medical system.

Based on the distribution of the Hong Kong elderly living in the GBA, cities or regions with the largest number of Hong Kong residents should build at least one high-quality nursing home. The “demonstration base” could be selected from those existing state-owned or privately owned institutions which have been trained by Hong Kong or international institutions or have been qualified, funded by local governments. The demonstration bases should be allowed to join the Residential Care Services Scheme in Guangdong, to increase the number of qualified places and allow Hong Kong residents to receive financial support. The role of NGOs from Hong Kong is crucial in improving service quality and training workers for mainland’s nursing homes.

As “mobile retirement” is gaining popularity, Hong Kong’s elderly people living in mainland China usually travel back to Hong Kong for social activities and medical treatment. Thus, it is recommended that elderly people aged 65 or above who have resident permits in the GBA should be granted half-price discount of taking high-speed trains travelling within Guangdong Province or between Hong Kong and Guangdong.

Findings suggested that Hong Kong elderly persons who live in mainland China are not familiar with the welfare policies and concession policies in Hong Kong, as well as how to solve emergency problems. The Hong Kong Economic and Trade Office in Guangdong should cooperate with NGOs in Guangdong, building a hotline service to provide elderly persons with information about Hong Kong and the GBA.